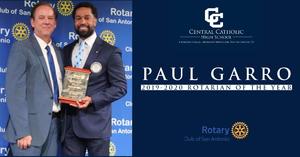 Paul Garro has been selected as the 2019-2020 Rotarian of the Year from our local International Rotary Club (Downtown San Antonio Chapter), which boasts being the second largest Rotary Club in the world with approximately 400 prominent servant-leaders. This award is the highest honor the Club bestows on a member each year. Paul Garro has been selected as the 2019-2020 Rotarian of the Year from our local International Rotary Club (Downtown San Antonio Chapter), which boasts being the second largest Rotary Club in the world with approximately 400 prominent servant-leaders. This award is the highest honor the Club bestows on a member each year. As Rotarian of the Year, the award represents Mr. Garro's constant demonstration of the Club's motto: "Service Above Self." Mr. Garro exhibits exemplary humanitarian service, with an emphasis on active involvement in helping others engage in meaningful service to the community. The award recognizes Mr. Garro's ability to engage volunteers in meaningful service projects, facilitate strong community bonds, and forming enduring relationships that create positive, lasting change locally and around the world. Mr. Garro is best known for listening to the people being served and humbly recruiting their service alongside Rotarians.

He has been a member of the Rotary Club of San Antonio since 2007 when he joined by the invitation of Rick Cavender and Pat Frost.

Cancer has no prejudice nor discrimination; no empathy nor map for navigation; no deserving reward nor justification.  And when cancer falls on the trail of a young Texan, we have the responsibility to put on a pair of cowboy boots, walk beside them vulnerably and demonstrate our love unwaveringly.

Emboldened with a unique Texas boot design and perfect fit, we must pledge to confidently journey with family and friends and resolve to walk beside our children in hope, remain steadfast in faith, and vigilant in our efforts to heal our young Texans. As if the boots have healing power, we commit to wear them as treatment and remain animated by a passion for life and a tenderness for the trek.

This sculpture is a collection of cowboy boots gathered from fellow Texans who each joyfully gifted their boots to the American Cancer Society so that the young Texans with cancer gain a moment of solace and encouragement on Wrangler Day, today and each day forward.

The San Antonio Rotary Club was chartered on November 1, 1912.  The Club grew to 128 members its first year led by Herbert Hayes. From its inception, the Club has been about service.  One of its first projects was to erect a community Christmas tree in Alamo Plaza.  As there was no government program for the poor, Rotarians banded together to provide food and gifts for the children.  In those early years, Rotarians sponsored the hanging of colored lights for the River Walk, supported orphans, raised money for the Boy Scouts, donated funds to fix the roof of the Alamo, and acted as volunteer fireman during a strike by the local firefighters. The Club's focus shifted to the youth of Bexar County, and in 1921 a Student Loan Fund was established.  In time the Club decided the community would be better served by providing scholarships, and the Youth Education Foundation was formed in 1984.  Hundreds of students have been able to pursue their educational goals with the help of YEF. Continuing its dedication to education, in 1991, the Club established one of the largest dropout prevention program in the nation, the Sam J. Riklin Rotary Diploma Plus Program.  Besides providing a monetary incentive for good grades and attendance, the program provides mentors and a path to additional scholarships.   In addition to education, our Club provides a safe haven for children through its Kingdom for Kids program.  In a hands-on service project in under-served areas of the city, playgrounds are built, landscaping and soccer fields are installed.   Thousands of children have benefited from these playgrounds. As a member of Rotary International, our Club's service extends throughout the world, aiding in the eradication of polio, providing clean water, equipping literacy and adult education centers, providing medical equipment, and much more. This year's pinnacle project was the successful introduction of an ice skating rink downtown benefitting the various charities connected with Rotary.