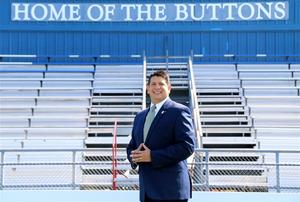 For over thirty years, Mr. Ybarra has seen success in coaching, teaching, fostering student leadership, and instilling student discipline. As part of his role as VP for Student Development, Mr. Ybarra will assume responsibilities as the immediate head of the athletic department.
St. Paul famously uses athletic imagery to discuss the Christian life, from winning the race, receiving the crown, and the interior training required to become closer to God (Hebrews 12:1, 2 Timothy, 4:7, 1 Corinthians 9:24-26).
The world of sport offers a rich array of ways to describe our discipleship, our formation in faith and our development of a Christ-centered life.
Sport is a human activity of great value, able to enrich people's lives; it is enjoyed by men and women of every nation, ethnic group, and religious belonging. The Olympic motto "Altius, citius, Fortius" is an invitation to develop the talents that God has given us (Pope Francis). Our Central Catholic staff pledges to facilitate the development of our students' God-given talents of which Pope Francis provides a reference. Our coaches play a transformative role in that development, thus necessitating a strong sports administrator and spiritual leader that can positively form both the coaches and students at Central Catholic.
Recently, Mr. Hector Rodriguez, who has served as Central Catholic's Athletic Director for the past two years, has announced his retirement. Hector wants to spend more dedicated time with his wife, family and especially his grandchildren. Immediately, we looked within our team to find a servant-leader who will seamlessly receive the baton from Mr. Rodriguez.
We are grateful for Coach Rodriguez's talents, time, and service to the mission of Central Catholic. In his time serving as AD, he has successfully led the athletic program, its coaches, students, and booster club. "It has been my pleasure and honor to have served as Athletic Director for Central Catholic High School for the last couple of years. I am now in my 40th year of serving as an educator, assistant coach, head coach, athletic coordinator, assistant athletic director and now athletic director. I will be retiring at the end of the year. The experiences I have gone through from working with student-athletes, faculty and staff have been very rewarding. I wish each and everyone one of you the best in the future," said Coach Rodriguez.
The development of leadership and moral character in its graduates are two integral components to Central Catholic's mission. The athletic department plays a pivotal role in achieving this mission. Success in these two areas will both benefit from and support the achievement of the overall team and school success. To accomplish this, Central Catholic's next leader of the athletic department must not only understand the culture of the sport but also must be knowledgeable of and embrace the purpose of sport (team, servant leadership and the Marianist charism). Additionally, this person must have a proven track record of developing each student's moral character and striving for excellence. There is no better person equipped for the task than Mr. Eddie Ybarra '83.
For over thirty years, Mr. Ybarra has seen success in coaching, teaching, fostering student leadership, and instilling student discipline. His vocation to serving the community of Central Catholic is unwavering and expressed to its fullest extent. As part of his role as VP for Student Development, Mr. Ybarra will assume responsibilities as the immediate head of the athletic department. He will be able to more directly influence a department in which over 80% of students participate. Opportunities include the expansion of the Big Brother program, a more in-depth Servant Leadership Program, and the development of the Characteristics of a Marianist Coach and Athlete. In its essence, an athletic department fosters the development of students. It is fitting, then, that Mr. Ybarra as Vice President for Student Development directly oversee this department.
"I have grown to love Central Catholic each year that I have been on this Campus. One aspect of our Marianist charism is to serve where there is a need. I look forward to the opportunity to engage and influence the development of our student-athletes directly and instill in them a servant leadership mindset and the values of Central Catholic," said Mr. Ybarra.
"I am reinvigorated by the challenge. Discipline has been my common denominator as an administrator for 23 of my 31 years. I am looking forward to adding to what past athletic directors have accomplished in the formation of our athletic program."
While Mr. Ybarra, by his very nature, will begin immediately planning for his new responsibilities, he will not officially assume this role until July 1, 2019. In the meantime, he will be assisting the principal in a search to fill the role of Dean of Students. Central Catholic is most grateful to Mr. Ybarra for his service to the school, leadership in student development, and exercise of his talents indirectly heading the athletic department. Thank you for your support of his leadership and Central Catholic's vision.