Mission Statement
Central Catholic High School is a college preparatory school educating young men, from diverse backgrounds, in the Marianist tradition for success through the development of scholarship, leadership and moral character.
History 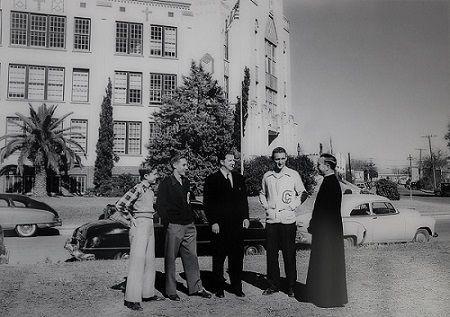 The first boys' school in San Antonio and still one of the largest all-male private secondary schools in the state of Texas, Central Catholic High School remains a prestigious landmark in San Antonio and a symbol throughout South Texas of teaching excellence.
The school was founded in downtown San Antonio by teaching Brothers of the Society of Mary (Marianists) on March 25, 1852, and although its location has been changed several times to accommodate expansion, the school still is tied closely to mid-city and the historic San Antonio River.
The Society of Mary, a worldwide teaching order, was founded by the Blessed Father William Joseph Chaminade in France in 1817 during the turbulent times of the French Revolution. He re-Christianized southern France through the founding of Sodalities (small Christian communities) that prayed together, studied the Catholic Faith and practice, and did good works for their neighbors to spread the Gospel of Christ. The Society of Mary grew from those Sodalities as young men offered themselves full-time to the work of evangelization. Blessed Father Chaminade determined that working in schools would be the best way to spread Sodalities and the Catholic Faith through the world. As Chaminade said, "we teach only in order to educate."
During Chaminade's lifetime, the Marianists extended their work from France to other countries in Europe; in 1849, the congregation came to America. In 1852, the first Marianists arrived in San Antonio, then a city of only about 3,500 citizens. 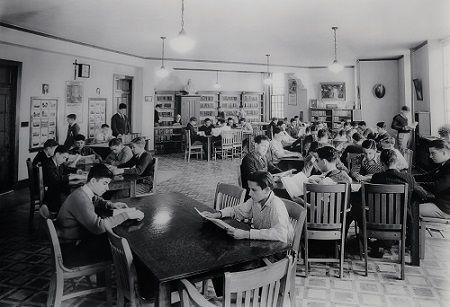 The school's history and the several changes in campus location it has undergone are succinctly summarized in a Texas Historical Marker on the east lawn of Central's present facility at 1403 North Saint Mary's Street, only a mile from its original location and within a stone's throw of the river:

"This school originated at a time when San Antonio lacked a boys' school of any kind. Bishop Jean-Marie Odin obtained teachers in France from the Society of Mary: Nicholas Koenig, Jean-Baptiste Laignounse, and Xavier Mauclerc. Andrew Edel, another Marianist from Ohio, was the principal. San Antonio layman Timothy O'Neil also joined the staff. The school opened March 25, 1852, in two rooms over a livery stable near San Fernando Cathedral. During that winter, the Brothers erected a building near the San Antonio River. 'Saint Mary's Institute' occupied that campus on March 1, 1853, and ended the school year with 100 pupils of various creeds. Enrolled as day students were Anglo, French, German, and Mexican-Americans. South Texas ranch boys attended as boarders. After expanding that building, the Brothers erected others, including a four-story 'skyscraper' unique for the 1870's. St. Mary's University was an outgrowth in 1893. After several changes of names and facilities, Central Catholic High School, in 1932, become another successor of the pioneer effort."
Throughout its history, Central Catholic has earned renown as an academic and spiritual leader in values-based education. As a result, through seven generations of graduates, Central Catholic has provided the community with men achieving what is truly good in their roles as citizens. Graduates include doctors, teachers, priests and deacons, businessmen, lawyers, military and political leaders.
Now, in its third century of Christian service, Central Catholic High School's alumni, students and religious, clerical and lay leadership are building on the past to bring about a new era of academic achievement and unprecedented physical development.
Central Catholic High School admits students of any race or national origin to programs and activities of the school with all rights and privileges. Equal opportunity and access is provided to persons without regard to race, national origin or gender in the implementation of employment policies and procedures. This policy is in compliance with Title VI and VII of the Civil Rights Act of 1964 and Title IX of Education Amendments of 1972.