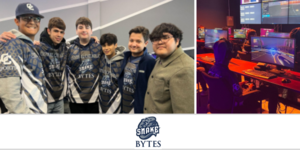 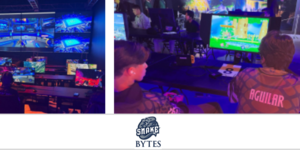 This past weekend our eSports Program,” The Snake Bytes” competed in the R20 League at the  Tech Port Center + Arena in Port San Antonio. Three teams representing Central Catholic were the Rocket League, The Valorant Team, and The Ultimate Smash Brothers Team.
The teams were accompanied by staff moderator Sra. Mendez and Dr. Ballesteros, along with family and friends.
The eSports Program is led by Aiden Gutierrez, the Rocket League Team, consisting of Ethan Winfrey, Magnus Zuniga, Albert Alvarado, and Seth Arteaga, went 2-3-0.
The Valorant Team, composed of Nathan Talamantez, Rudy Davila, Miles Procknow, Jack Brysch, Diego Posadas, and Daniel Carmona, unfortunately, couldn’t compete because of technological issues. They did spend time supporting their fellow teammates.
The Ultimate Smash Brothers Team consisted of Isaac Pohl, Kolby Cruz, Luke Martinez, Caleb Gonzalez, and Mariano Aguilar. Luke placed within the Top 8, and Isaac placed within the Top 4 of the 72 players who competed.
The Top 4 do not compete with each other and instead get a place in the 16-member bracket at the beginning of the next tournament.
The next in-person competition takes place in early December. Go Snake Bytes!