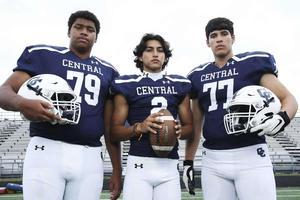 With a host of returning starters on offense, including three committed to FBS programs, Central Catholic has set lofty goals in 2021.

With a host of returning starters on offense, including three committed to FBS programs, Central Catholic has set lofty goals in 2021.

“Everyone has the same answer — state,” said Ben Rios, the Buttons’ senior two-way all-state starting lineman. “Of any year I had at Central Catholic, this is by far the best chance. The goal for us is to work together and play hard.”

Rios is one of three Buttons committed to FBS programs. Rios (6-5, 270) anchors the offensive line with senior Deandre Marshall (6-7, 320). The longtime friends are committed to UTSA.

The Buttons are coming off a season shortened by the pandemic. Central Catholic went 4-2 overall and lost to Argyle Liberty Christian in the first round of the TAPPS Division I playoffs.

The Buttons will be in the mix to contend for the TAPPS 2-I district championship with Houston St. Thomas and Antonian. The Buttons bring back the most experience of the three teams and are confident about making a long run past most of the state’s 15 teams in TAPPS Division I.

“You can feel the tension like we have something to do this season,” Gomez said. “There’s a destiny we have to achieve. Everybody knows the goal, and everybody is on the same page. I’ve never felt this in the (previous) three years I’ve been here. I’m really liking it.”

The Buttons return nine starters on offense, including four on the line. That gives Gomez some peace of mind as he leads the Buttons’ balanced attack

“I feel confident going into the huddle knowing I have guys who can protect me,” Gomez said. “My whole line makes me comfortable in the pocket and makes my job a whole lot easier.”

Rios and Marshall’s chemistry gives Gomez the most comfort.

“We motivate each other very well,” Marshall said. “We compete against each other. He gets a step ahead, and I try to catch right back up. We’ve slowly progressed that way, and I’m excited to continue our journey throughout college.”

They first met each other as sixth graders at San Antonio Academy.

Rios said: “We started by not liking each other, but as time went by, we grew closer and closer.”

Rios traces one of the sources of conflict to middle school when they ran the mile side-by-side. Marshall wheezed his way through it, prompting Rios to tell him he “sounded like a dying whale.”

That didn’t sit well with Marshall. Rios later found out Marshall suffered from asthma and didn’t have his inhaler with him.

They overcame that initial interaction.

“We slowly started a bond that’s unbreakable now,” Marshall said. “It’s one of those things like we’re brothers. Sometimes, we are going to fight, but at the end of the day, we still love each other.”

Rios said they have talked about playing college football together since they were sophomores. With their sizes, they were going to attract college scouts.

Marshall committed to UTSA on July 1, choosing the Roadrunners over an offer from Charlotte. Rios committed the next day. He canceled a planned visit to another school after Marshall pledged to UTSA over 17 other offers.

“I thought about the location, the group (of players),” Rios said. “You know, it’s my hometown, and I want to be somewhere were I’m really close to my family.”

Rios and Marshall believe Salas is ready for a big season after passing for 718 yards and six touchdowns and rushing for 469 yards and six scores in the Buttons’ truncated 2020 season.

“He’s probably the best quarterback in TAPPS, in my opinion, with his leadership and skills,” Rios said.

Rios likes where the Buttons is headed after going 4-7 his freshman season in 2018 and 5-6 in 2019. Central Catholic seeks its first playoff victory since 2010.

“It’s crazy to see how we’ve progressed as a team,” Rios said. “The sky’s the limit for us this year.”