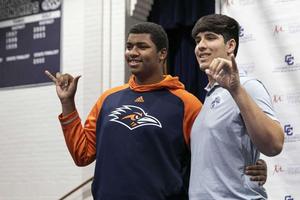 Offensive linemen Ben Rios and Deandre Marshall met during their sixth-grade year at San Antonio Academy, but they didn’t begin talking about the possibility of playing college football together until their sophomore season at Central Catholic.

Their relationship “started a little rocky,” Marshall said, though a few years on the football field and some late nights playing Madden taught them that they have more in common than might be apparent on the surface.

This summer, those similarities included offers to continue their playing careers at UTSA, and Rios said the two talked on the phone for about an hour evaluating the pros and cons of extending their time together as Roadrunners.

“We said, ‘Why not? Let’s keep it going. Let’s keep it rolling,’” Rios said. “We’re pretty much brothers at this point, so it’s crazy to say we have another four or five years.”

After a joint tour of the Roadrunner Athletics Center of Excellence, Rios and Marshall sat in coach Jeff Traylor’s office and explained why they were committing to UTSA.

The move became official with the start of the early signing period Wednesday, as the two sat side by side again for a joined signing ceremony in Central Catholic’s gym.

Unlike most of the 13 new Roadrunners, Rios and Marshall enter college with a built-in roommate.

“To be able to have somebody I trust, and love, and call my brother, to be able to go to him and to relate to him so we can help each other out, is definitely going to help a ton in college,” Marshall said.

Like brothers, Marshall said the two sometimes get mad at each other or have brief arguments on the field when Rios’ vocal, energetic style clashes with Marshall’s more quiet, focused approach.

Rios and Marshall played opposite tackle positions for most of their time at Central Catholic but ended up starting next to each other this year when Rios switched to guard after missing time with an injury.

“They’re total opposites, but they’re inseparable,” Central Catholic coach Mike Santiago said. “I’m assuming I’ll at some point be going to a dual wedding with both of these guys. It’s really something to see.”

Both were drawn to UTSA for many of the same reasons. Marshall highlighted the connection with the staff, often chatting with offensive line coach Matt Mattox about food and cooking up a signature mac and cheese recipe during Mattox’s home visit.

The opportunity to stay close to home was also a plus, Rios and Marshall said, as was the commitment UTSA showed to its program with the August opening of the RACE facility. Traylor’s new 10-year contract and the connected improvements to the Roadrunners’ resources were also a selling point, Marshall said.

Traylor said he was intrigued by both prospects because of their size, character and IQ.

“They came to camp and really wanted to be here. Just very loyal to the 210,” Traylor said. “They’re very much about UTSA, and we’re excited about both of those young men.”

From the announcement of his commitment on Twitter through Wednesday’s ceremony at Central Catholic, Marshall frequently thanked his mother, Paula, for all she struggled through to help him earn a college scholarship.

Marshall said Paula “would sacrifice food to make sure I’m full,” providing as a single mother to Deandre and his three older sisters. With limited money and a car that was breaking down, Deandre said Paula “just made it work,” buying a minivan so he would have plenty of leg room on trips to camps at SMU, Baylor and Texas Tech during the summer.

Paula pointed to the coaches, family and friends who stepped up to make sure Deandre had shoes or whatever other needs might arise.

“The hardest part is just making sure he could still attend the schools he wanted to,” Paula said. “He was blessed and got some scholarships, but it was still a struggle along the way.”

Rios and Marshall add to the recruiting pipeline between the San Antonio area and UTSA, as Traylor also signed seven local products in the 2021 class and two more in 2020.

With 13 newcomers secured, Traylor said the Roadrunners have about seven available spots and will look to fill needs at offensive line and cornerback.

All seven of UTSA’s high school signings Wednesday are from Texas, and Cy Park linebacker Owen Pewee is the highest-rated recruit in program history, per 247Sports.

Looking back at the build to the early signing period, Traylor said athletes’ ability to profit off their name, image and likeness starting ahead of the 2021 season played a major role in the process and is something UTSA is “going to have to really get in the game with.”

“You’d be shocked at how much name, image and likeness is involved in all of this right now,” Traylor said. “It’s on everybody’s mind, pretty much. … That has become very, very in the forefront right now. It’s just different. We all have to learn to adjust to it.”

View photos from the event: