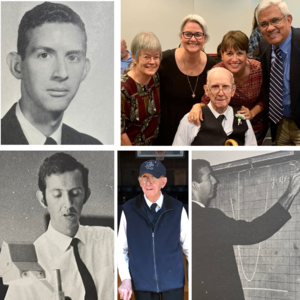 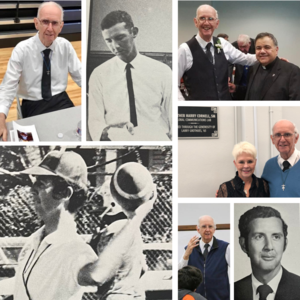 With heavy hearts, we regret to inform you that Brother Harry Cornell, S.M. (CCHS Class of 1958), has passed away at the age of 81.


Brother Harry was an icon at Central Catholic who taught generations of young men. He was a Marianist Educator, Master Instructor of Mathematics, Coach, Mentor, and "Voice of the Buttons."


After graduating from Central Catholic in 1958, Brother Harry entered the Society of Mary, professing his vows in 1959. He returned to CCHS in 1962 after completing his degree at St. Mary's University.


In 1968, he agreed to announce all Button sporting events. Brother Harry was the voice of the Buttons on and off the field, echoing in the heads of thousands of alumni--challenging them to use what God has given them, the advantage of working together to advance their lives and to transform the world into what God intends.


During his nearly 55 years of teaching, he taught and worked his way up to the Chair of the Math Department and was instrumental in introducing Computer Science classes at Central Catholic. If Math was the language of God, Brother Harry was His most fluent and faithful follower. He moderated Photography and Debate Clubs, coached football, and taught every Math course possible, and he was also the Director of Camp TECABOCA for over 30 years. In 2019, the Press Boxes at our Bob Benson ‘66 Stadium, at our Kahlig Baseball Field, and the Scorer’s Table in the Kahlig-Cowie Convocation Center were all named in honor of “Brother Harry Cornell, S.M. ‘58 - The Voice of The Buttons.”


Alumnus, former Chair of the CCHS Board of Directors, and devoted friend, Mike Keefe ‘70, says about Bro. Harry, “He was a great man, a great mentor, and a great coach. He represents what the Marianists are all about. He will be missed.”


Details regarding services for Brother Cornell will be shared once they are finalized.